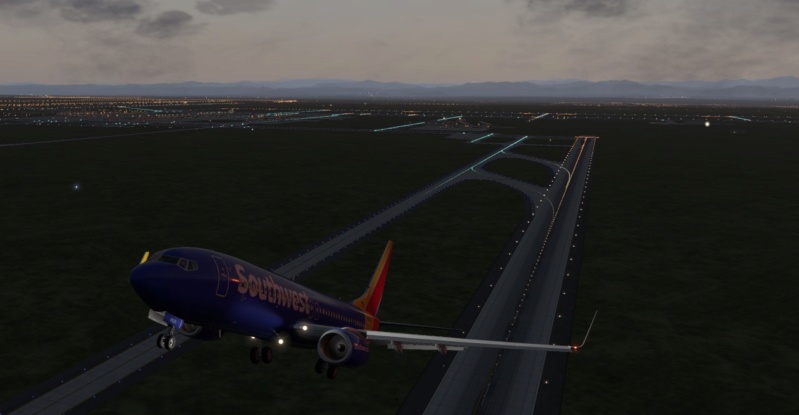 19,000 feet per minute!!! That would push all your blood into your toenails.

Impressive. No doubt it was light with minimum fuel. The Boeing 757 was also well known for its impressive clime rate even fully loaded. No match for fighters though. I was at an airshow in Dublin once when three F15s of the USAF did a display. The finale was a high speed pass and climb. The three were dots in seconds but heading directly towards a contrailing airliner. Apparently the pilot saw them coming and thought he was under attack by the Irish Air Corps. But they don't have fighters. Lol.
I had my moment of the glory once. I had to collect a Cessna 182 from an airport once. It was a skydive plane so light and with minimum fuel. I held it down on the runway to build speed. Then pulled up. It was like a rocket. I was at a thousand feet by the time by time I passed the end of the runway and ran out of energy. Great fun.

Don't ever fly with me, I am unlucky. My first hairy moment was landing in Malta. The plane caught a crosswind pretty close to the runway, not more than a hundred feet and the pilot corrected it n time. I thought it was me, but then everyone clapped as we hit the runway...…

Then Air France lost my blue stripey suitcase in Japan, it arrived at my hotel next day, but I lost that first evening coz of it and the return flight was cancelled and I got an extra night in an airport hotel with just Japanese telly and a fridge bar for company.

My next bit of bad luck was landing at Heathrow, another time, the plane was again close to the runway then it suddenly pulled up at quite a rate, apparently there was another plane taxying on it.

Then I had a man die on the plane on the way to one of my liccle holidays, he had a heart attack. There was a doctor who I assisted on board. The man was very big and when I gave the doctor a breather with CPR I had to kneel upon his legs, there was not much room as you can imagine and his wife and teenage children were hysterical. The pilot landed us at Verona, the plane dipping and falling like a stone. It was not Verona airport, if it has one, it was a nearby military base and armed Italian Air Force men with very scrambly egged uniforms came on board with sub machine guns. Then the Paramedics arrived and took over, the one giving CPR ad shocks from ther de-fib, was atypical Italian, he suddenly threw his hands in the air and shouted 'El Mortay', (sorry my Italian language is non-existent), the family squealed and though they continued it was clear the man was not going to make it. They carried him off, family in tow and we took off about an hour later.

Then..... and this is going to make you want to NEVER fly with me, it happened again, same flight, about three years later on my journey out for vacation. A man much further forward suffered a heart attack. I offered help but this time there were enough trained people on board willing to do the CPR, I said I was available and stayed close by. They gave him CPR and shocks and the plane, which must have been almost over Vienna fell out of the sky and landed at Vienna. The paramedics arrived and we were at Vienna for 10 hours. The BA flight flew back to Britain empty and we had to wait for the relief flight. I guess something might have been wrong with cabin pressure? Coz the man was taken to a hospital in Vienna, we could see the ambulance speeding off blues and twos, they never told us any more. It is possible he died and was being taken back by the plane and the ambulances had another call.

Another time, I was coming home from Japan at the very height of the SARS crisis? If you remember. A Chinese, not Japanese, girl sat next to me for the 13 hour flight with a mask on, she was coughing and sniffing the whole trip! But I guess she just had a cold.

I don't fly that much, about once a year, but I've had my share of stuff happening. Oh, I forgot, on the big ones that go to Japan, the JAL planes have, or had, a camera you could watch the ground underneath and ahead of the plane. I did not look much and I just hit it out of boredom over Siberia...… there was a Russian jet fighter underneath the plane!!!! I showed other passengers and was going to call the hostess when it shot away! Everyone was looking out the windows, but it never came back.

Wow, Celia - I don't know if it is best you are on a flight for your medical skills or best to stay away from sharing a flight with you for the delays.

I haven't been on an airliner since 1986, and I prefer it that way.

Thanks Celia, just let me know when next you're flying and I will avoid. Just so you know I'm flying to Amsterdam next Wednesday on Ryanair. So stay away.
Ryanair has a reputation but I've never had a problem. Besides I'm friends with several of their pilots. One in my opinion is the best pilot I ever met, not just my opinion other pilots said the same thing about her. Yes a woman, a rare thing in aviation. Yet several of my best Instructors were women. I always preferred female Instructors. Surprise, surprise.

I've never really had a scary moment in an airliner. But what scares other passengers wouldn't scare me anyway. One is the 'go around' which occasionally gets into the headlines when an airliner has to abort the landing and go around again. 'Passengers scream in terror after pilot abandons landing' type headlines make me laugh. I was in one once and I gasped in exasperation because we were running late anyway flying into Madrid with a connecting flight onward. I knew I was about to miss it. The woman beside me became concerned and I apologised and in my best Captain Sullenberg voice explained that it while it was not really routine but proof of the safety of flying. Which it is. A go around is quite safe and there is no danger in a go around. I've made a few go arounds myself entirely down to my own stupidity. But better to go around than crash.

No most of my nervous moments in flying were entirely self inflicted except an engine problem once. I landed once with so much ice on the aircraft from flying into a cloud that I felt sick.


I'm the opposite of fear of flying. I find it boring now. A friend took me flying in his little aeroplane not long ago. A thing called a Land Africa. I was terminally bored.


The glamour of aviation has truly wornt out.