Chelsea Manning Is Jailed for Refusing to Testify in WikiLeaks Case

WASHINGTON — Chelsea Manning, the former Army intelligence analyst who provided archives of secret military documents to WikiLeaks in 2010, was taken into custody on Friday after a federal judge found her in contempt for refusing to testify before a grand jury that is investigating the antisecrecy group.

Judge Claude H. Hilton of Federal District Court in the Eastern District of Virginia ruled that Ms. Manning must stay in civil detention until she testifies.

She is continuing to act like a petulant teenager who thinks... I have no idea what she is thinking about.

“Chelsea is a tremendously courageous person and this outcome was not unexpected but this an appealable order,” said her lawyer, Moira Meltzer-Cohen.

Ms. Manning had vowed not to cooperate in the investigation even though prosecutors in the Eastern District of Virginia granted immunity for her testimony.

“In solidarity with many activists facing the odds, I will stand by my principles,” she said on Thursday. “I will exhaust every legal remedy available. My legal team continues to challenge the secrecy of these proceedings, and I am prepared to face the consequences of my refusal.”

She can spend up to 18 months for failure to appear and answer questions. Her claim of already answering these questions is moot as this is a different court/time/investigation.

What is so bad about standing up for one's convictions (No pun intended.) 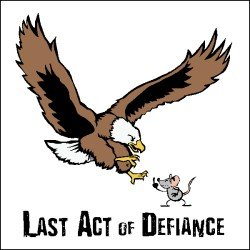 Remember, the mouse always gets eaten in the end.

Sorry, Beth but she is pissing all over herself for little, if any benefit to herself or to the greater good.

She did whatever good was going to come from her actions when she delivered the documents to WikiLeaks.

Now, she is standing in her bedroom with her door closed stamping her feet because she has been asked to act like an adult and help find out what is going on with the rest of the WikiLeaks investigation.

Similar topics
» Girl me vs gu6 me
» Boy Meets Girl
» Tara the geek girl
» Boy Meets Girl UK TV series 2 seasons
» Does anyone here, have any fitness tips to give a girl?