So Bahrain has decreed that it wishes to progress onwards to the late 5th century A.D. 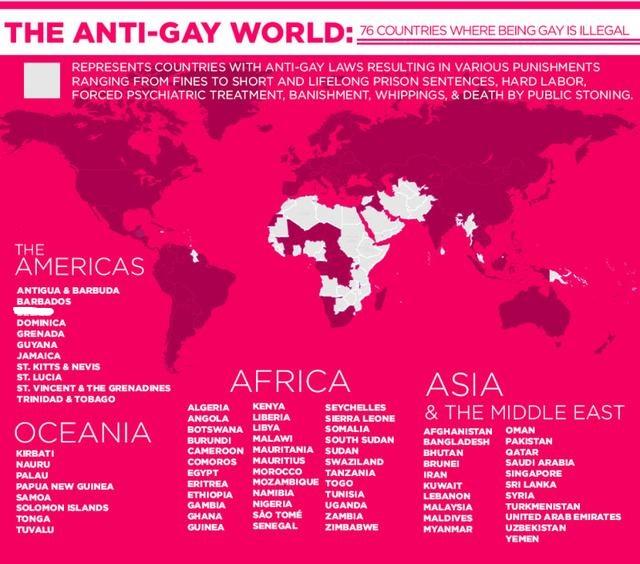 I consider any death based on bullshit primitive religious beliefs to be murder.

I will consider The Sultan of Brunei to be a murderer.

Any country that supports this, will be seen as both primitive, and subject to being treated as states that support religious murder.

I am flat out denying any religion any form of compassion.

They are based on lies. Any accidental 'good' resulting from reading anything in the Bible, is essentially of the person and from the person. Not the book or anything in it. You can read a label on a can of baked beans, and obtain a moment of revelation if you have an intellect worth mention.

I'm not telling anyone here, or anywhere else, what they can or can not think.
But I AM telling you, not once has anyone in any religion, ever produced a single reason for believing in any of it worthy of passing any real test.

I am offended on many levels by plenty of the world's cultures to a point.
At least you don't need to worry about me blowing you up over a refusal to accept evolution and physics. I don't have an obsession with killing anyone over climate science arguments. Granted, I won't need to kill anyone over climate science debates. Because those who won't accept it, are likely going to kill themselves as a result of their inability to accept it.

I have no sympathy for those who simply will not use that large blob of mental muscle between their ears.

Mother nature has no shortage of tools at her disposal.
A sudden earthquake in California could initiate the collapse. The Cascadia fault letting go will destroy the complacency of the rich West Coast too. The volcano in the Canary Islands letting go will initiate the death of the US east coast. Then there's Yellowstone. Or we might actually nuke ourselves. Or create a virus we only thought we could control. Or modify some organism in a stupid clumsy fashion, and create a major problem. Or maybe the rich finally push the schmucks past the tipping point until we all just lose our collective shit together.

I'm not afraid of fucking assholes who live in a warped view of reality unable to comprehend that I'm a female person stuck in a supposedly male body. Because fucking assholes, they've always been there. There were fucking assholes in humanity when we were barely out of the trees. Observe a group of chimpanzees, and no doubt at all, at least one will be obviously an asshole.
I'm sure at least one dolphin or Orca, or wolf in a group will be an asshole to the rest.

I'm only afraid of collective stupidity.
I can hate on Trump or the Pope, or Doug Ford, but they are just one person.
The real problem comes from the assholes who put them in power.
I think Conservatives are morons, I think Catholics are the biggest problem in Christianity, and I generally don't mindless stupid voters who vote in the plainly greedy bastards who don't even care about the people that voted for them. Not one PC voter in my home town is going to benefit from anything Doug does to Ontario.

As the resident Vocal Christian, I have to say I am appalled at this map. How could anyone who listened to even three percent of what Yeshua said consider judging someone else? And to impose a death sentence?? Like Lesley said: murder, plain and simple.

Kindness and compassion are what my faith has taught me. Maybe I'm naive. Maybe I'm delusional. Maybe I'm wrong. But, I think the majority of believers are the ones who are wrong. And I suppose I will keep thinking that way. I will keep trying to set an example.

And I will pray for the poor people trapped in these countries.

I was raised Anglican and to some extent, I still do hold some belief in creator.

There is naturally, nothing whatsoever wrong with being gay, it is not a choice at all either. I was born with a female mind of that I have no doubt. Neither should anyone else doubt it. Nobody has any business questioning my circumstance. It is in fact unfortunate, for it is much, much easier to be cis male and hetero to boot. There is no choice involved, so why would governments jump from a great height upon my kind?

Why would any individual choose difficulties and the wrath of bigotry upon themselves? It is not sexual, I gain zero pleasure from being who I am, only if I choose someone I like for a sexual relationship and then only at the obvious moment do I gain sexual pleasure, same as everybody.

Those nations, bigots in power, have governments that have not lost the repressed culture or religion that closely adhere to, this from writings and ritual laid down by previous bigots in power of their society. Some for thousands of years. Although gay and transgender people have been accepted in other societies for many thousands of years and in some cases been repressed in relatively modern times, other societies have jumped from a very high place upon a minority that are too scared to fight back for a very long time and many of those listed are so.

It is outrageous in 2019 and civilised governments need to take a hard stance against them, global travel exports these bigoted ideas as being 'normal' when governments enforce it, things need to change, embargoes and trade bans.... I am not holding my breath.

I'll just state upfront that I have no need for a god so any law based upon a god is null, void and meaningless.

Unfortunately, I still live in a world where religious law is still the norm in many places. It doesn't matter if the law is based upon the Torah, Bible or Qur'an. Or the Hindu or Buddhist books or any law based upon the 'teachings' as laid down by an actual human writing the utterances of a magic god. Some law based upon religious teachings is good - thou shall not steal or murder for example. But why shouldn't I be allowed to covet my neighbor's goods or his wife? (Remember my statement on 'greed'.) Also, while I must not mark up your place of worship, I will rail against its teachings from the sidewalk in front of the place as I see fit, even if that is what you consider blasphemy.

That map reminds me of a comment someone made about the world. He said there's a very thin veneer of civilisation in many countries outside what we call the west. A wise comment when you at that map and consider the countries in white. Many also live in a constant state of chaos and war. Remember it's not just LGBT but their attitudes to women and girls in general is also disgraceful. Tolerance is sorely lacking.