Faith in humanity (not sure I have much)

Faith in humanity (not sure I have much)

I've come to some conclusions recently, that is sad, and I suppose unfortunate.

I seem to enjoy humans, only when they are fictional.

Romance novels, where men are ok, and women get their happy ever after. Horribly unrealistic. But consider this, romance novels outsell anything else in print. Likely a good reason for that. Maybe it's because women can't get what they want in the real world.

Forums. It seems it doesn't really matter much what the topic is, the moment it's about the real world, it gets real ugly. Games, models, woodworking, knitting, I've yet to experience a 'harmless' forum topic basis that was able to indulge the real world 'safely'.

I've had to stfu on my own Facebook because I can't even trust my own thoughts to remain 'nice'.
I've set everyone to 'unfollow' because it's either their thoughts, or my reactions, or it's just the news is ugly.

Just watched ep 05 of season 8 of GoT. Horrible, violent, brutal, but, it's imaginary.
It's fictional.
No one actually died.
As grotesque as any of the scenes were, the real problem, is the real world is much worse because the real world isn't fictional.

Say, for instance, climate change is the biggest scam ever.
Is that good or bad, really?
Say nothing actually really bad is actually going to happen in the next US election.
He either gets in and is a jerk for 4 more years, or, he's out, and we get on with bitching about the next one.
But, as a transgender person, I don't see any miracles happening for us in the next 10 years regardless.

I don't see us getting a happy future in my life span. I don't think a lot of good things will happen until my generation is all dead and gone.

The world is either massively fucked, or it is not.
But it's going to be the people under 20, right now, today, cleaning up whatever mess has been created.
And they won't be able to start cleaning until everyone over 40 is dead and gone.

I feel like a complete jerk for what I have done to my son's future.

Lesley, I know from your previous posts you are a bit of a half-full glass kind of gal. I think much of that half you have been hanging onto, looking into is rapidly evaporating away.

Please, find some way to fill your glass back up. There is no joy in looking through the bottom of an empty glass.

It's easy to get carried away with gloominess and we've been subjected to quite a lot of it lately in the news. It's easy to buy completely into it and think the worst. Right now we're subjected to endless scaremongering on every front, growing nationalism, threats of war, cyberwar, holy war, social media, climate change. There is no end of it.

But we've been here before, every generation has it's disaster scenarios. Some things never change.

But somehow we survived and moved onto the next great 'We are doomed' scenario.

Climate change hysteria particularly prevalent at the moment. I do think it's something to worry about not climate change but the hysteria around it. Only this morning I read an article that by taxing jet fuel enough flying would become so expensive it would discourage people from flying thus reducing carbon emissions.

The main result though would be to set the clock back to the time when flying was reserved for the elite because air fares were sky high in every way. The elite would continue to fly. The plebs would be excluded. Including most of the airline workers who would lose their jobs when airlines fail. Not to mention people working in tourism who will have fewer visitors. But we're saving the planet aren't we?

I've no objection to mitigating climate change but when you see something like that with it's very obvious consequnces. You have to wonder if there's any joined up thinking going on.

I'd be more worried that our children will find themselves living with less freedom than we're used to. If climate change is being used as a trojan horse to take many of our cherished freedoms then I'd be very worried indeed for my children.

In another article a senior civil servant said: "The reality is that a country we will have to change how we work, how we travel, how we socialise, how heat our homes and how we carry out our economic activity". Now he's no Communist or Fascist but the more than subtle implication is that if we don't it will be done for us. Imposed on us.

We'll survive climate change as humans always do. We adapt. But I'm more worried about the consequences socially. Oppression however well meaning is still oppression..

As for wars, well as the saying goes "Only the dead know the end of war" . They come, they go and unless it's all out nuclear war you only have to worry about war if you wake up one morning and find an enemy tank sitting on your front lawn. Given where most of us live it's an unlikely scenario.

Lately I've been trying to go the other way. Ignore all the doom and gloom and try to enjoy life and my kids. Trying anyway.

I think what bothers me most, is the notion "humans are clever, we'll manage, we always do."

A lot of things are rushing at us, that no one is actually talking about.

Ok, California. Great economy. For now. Even though people are leaving the state in increasing numbers, more so than the rest of the country apparently. The left might be in for a shock.
But the real danger isn't the fires. It's the water. Lake Mead has less water now than it had before the dam. Unless that's just a great lie. If we melt the snow cover of the mountains, the water is going to get less and less. When that water stops, well LA is going to be in for a massive shock. Not to mention all that wonderful food being grown in what is supposed to be a desert.

The Indians and the Chinese are both trying their best to take more water from the Himalayas than it can make. Yeah, it looks like there is a never ends supply of snow. But it is disappearing. Unless that too is a blatant lie. Those two countries hate each other, and they have nukes. There's billions of them, not millions of them. The LAST thing the US wants to do, is stick their nose into that mess. The Chinese thanks to a bias against females, has millions of men they can't cope with. 200 million men dying in a hissy fit would be a convenient solution. They could lose the equal of the entire population of the US in a day, and not care.

I think the world's economy will soon be driven by the dynamics of China and India as well.
If you have a widget to sell, where do you want to sell it? The US where you might sell a few thousand, or over there, were a bad day's sales would be in the millions. I don't think most of North America can even really relate to the realities of the upcoming future. We need to move to electric cars, forget all the reasons why it isn't going to be easy. The Chinese can sell millions of those cars, to billions of customers, and effectively eat the US auto industry. If we don't keep up, we'll be eliminated in the auto industry.

Having spent the last half of my career life in real estate development I fully understand the need for water.

California is having a deficit in water production versus use every year. The great aquifer in the Central Valley has been drawn down so much that in the southern portion of the Valley, the floor dropped nearly 70 feet.

Now, in California, if a developer wants to build more than 20 homes in a project, the developer must prove there is enough water to supply the project. This is getting harder to do.

The United States has a National Park known as Glacier Park in the Rockies. I visited that park in the mid-50s. The glaciers are all but gone now. 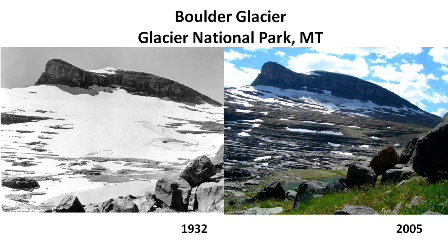 The great glaciers in the Himalayas are receding at the same time the great populations of India and China are overdrafting their water resources.

The glaciers in the Alps are rapidly eroding and Europe will likely be in a water crisis in a couple of decades.

Lesley's Canada is in pretty good shape with the great lakes in the Yukon and the snowfall capture by the coastal ranges.

Yep, my Canada is indeed a 'wet' country, holding more lakes than the rest of the world combined.
I'd say 90% of them are little better than bug breeding grounds though.

The Great Lakes are actually emptying, but winter does tend to put back plenty.
If the oceans rise, the Hudson's Bay area will actually get much larger. But generally speaking, Manitoba/Ontario/Quebec might be some of the safest terrain on Earth as far as wet is concerned.

Still, we've suffered some bad fires. It ain't THAT wet. Although, this spring, I think some would wonder about that too.

Celia - the problem is cost. It is a very inelastic demand curve where you will pay almost anything for a glass of water.

The cost is falling!

It is now only twice as expensive as ordinary water and falling. It used to be ridiculously high cost, but as I wrote, it is evolving, costs will come down, it will solve the world's water problem.

There may come a day, when the cost of oil is not measured in money.

There may come a day, when the only water available (drinkable that is), is the water we make.