So about 2 years ago now I had about half a dozen professional laser hair removal sessions for my lip and chin, which I thought was great, I loved the results but eventually had to stop due to a conflict of time and money. It always seems I can have either, but never both!
I have been wanting to revisit hair removal, but considering I laid out $600 over time, I was hesitant. So I began looking into those "at home" IPL flashy devices, found one on special for $158 (that's AU if you're wondering) and placed an order.
It hasn't arrived yet, it's due late next week, but I'm curious to see how it compares to the salon.
I'm curious, has anyone else here gone down this route, and what were your experiences?

I know someone here uses it and it does okay for them (sorry I can not remember who though). I do not know if they use it facially though.

I have tried it and could not get it to work well or consistently. It does not remove the hair permanently either from what I understand.

I had good results when I had it professionally done, but as I understand it too, the hair will eventually come back

Well I am the one that uses my Lumea Essential on a regular basis, it is my second IPL and it's still working after about 2 years. I also have a Tria home laser for the little bits, it's the precision one and I use that on my face, but be warned, that's only coz I have had laser treatment and it's for stragglers and also I have fine hair. Thick facial hair, or lots of it could cause burns.

The IPL, my Lumea is good for legs particularly, you have to not give up coz it takes quite a while for the hair to go. It is more effective but much slower with the Tria. I use both IPL and the Laser for my knees, as for some reason that is the only place on my legs now where I get hair come up as they always did. I think it's because they are very light hairs there. I think I might have to live with shaving them forever.

I don't do bikini coz it is very painful!!! Both machines are painful to some degree, I find the Lumea more painful, but the Tria is slower and the charge gives you only about 15 minutes work and then it's 3 hours to charge again, whereas the Lumea is over half an hour with a charge around 90 minutes.

Now any IPL bit where the light comes out is smaller than the machine head, so you have to be careful to overlap properly and also hold it square to the skin surfavce, else you are wasting your time. You always have to remember where you were though a second pass does not matter really. I recommend not using a white eyeliner pencil as some suggest, to 'grid' your legs and that, coz the light bounces off it!

I find IPL does halt hair growth by quite a bit after using it for a few years. It does thin the hair and regrowth is very much slower to reappear.

I have had a couple of ingrown with the Lumea but none with he Tria. The laser probably totally kills the follicle more effectively and results with that have been permanent. One setback at the beginning with the Tria was it actually drew blood n my face, underarms and a couple of stragglers that I wanted off on my hand too though that occurs less now. The best thing about these machines is that you continue to shave areas and still treat them.

The pain is like someone sticking a pin in you, sometimes it's quite a bit, but I just carry on. If it is excrutiating, turn it down a level!!!! These things can burn!!!!! Some say it's like an elastic band being flicked on your skin, well, if you have ever had laser you know it's more than that.

Light skin and dark hair is best, I have light brown hair on my body in most parts and it works ok, though I have to turn it up to the highest level. So if you have dark hair, start on the lower setting and see how it goes and slowly turn it up. It will work on the lower setting, so don't risk burning yourself coz you think you did not get results first time. It will take a couple of months and several passes to see results. The smell of hair burning will be in the air when it's working!

Hope it works for you darling, let us know how you get on!

I have one I bought in Lidl very inexpensively. I used it a bit and I definitely think it works. There is a noticeable reduction in the number of hairs. But it has to be an ongoing project. According to the instructions it only kills growing hairs and won't work on blonde but my blonde hairs are really fine.
But definitely my legs have seen improvement although shaving is still needed.

Thanks for the feedback

I have the textbook combination of fair skin and dark hairs, so I'm expecting some results at least.
I remember the sensation from the salon, I always flinched for the first flash, it is like someone flicking your face a few dozen times! I will definitely start on the lower settings and see how things go. It's due to arrive on Thursday, so I'll update when it arrives.

Well it arrived in good time. I've used it a few times already and it seems to do what it's supposed to. The sensation is more or less the same and there is the occasional wayward hair than gets caught in the firing line, sending up a pungent burning smell.
I guess the only real risk, aside from getting that light in your eyes, is becoming impatient - using this over the same area can and will dry your skin out and potentially burn. Still, I have a good moisturiser I use daily which seems to help. If I've gotten a bit over eager in one session my skin feels tight, but not in a nice way, so the cream does help.
Too soon to tell if this device will make a difference but I am excited to find out! 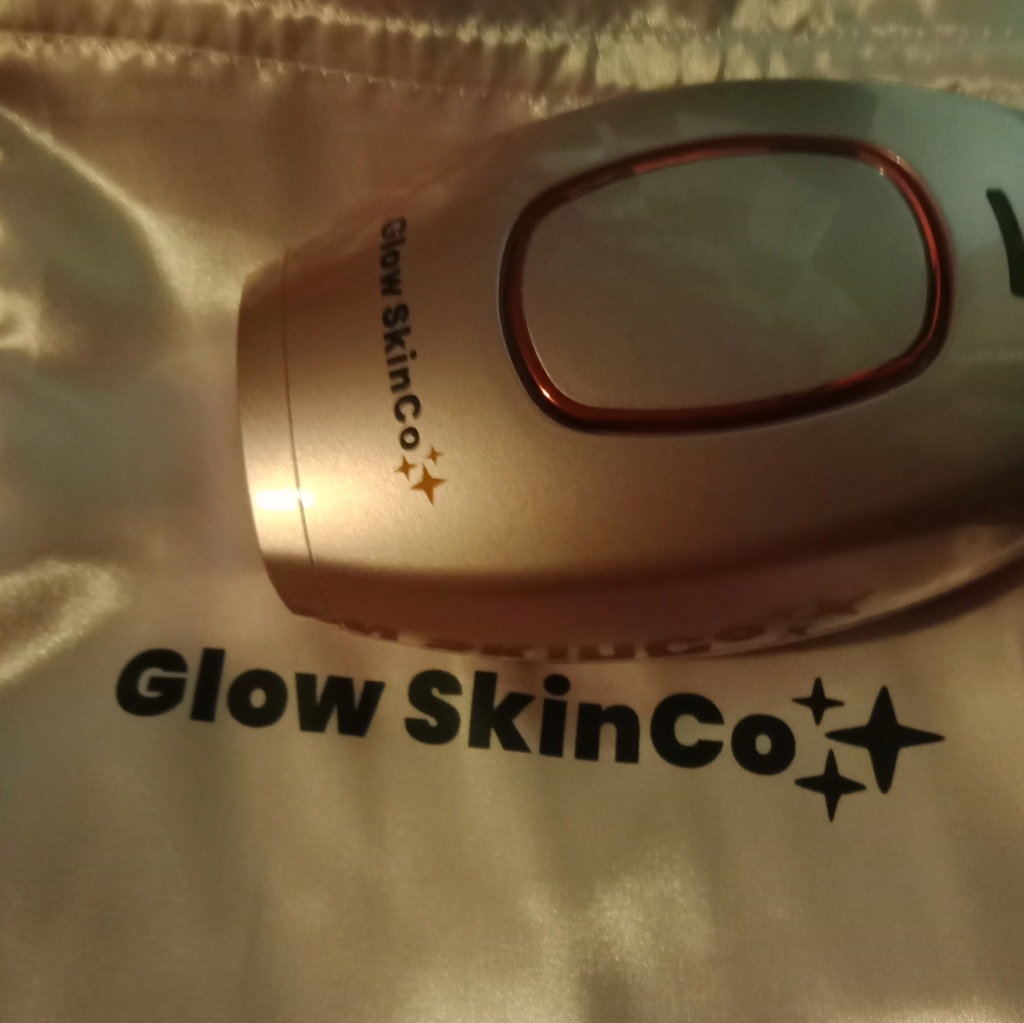 That looks the same size as my Lumea. How long are the charges working on it and can you use the top setting?, my Lumea is quite good and I can cover a leg, overlapping and that on one charge. But with the Tria I can barely do much at all, at a guess it would be about 8 charges for one leg...…..!!!! So I use that for small and persistent bits. I watch tv whilst I'm doing it, light things so I can look at what I'm doing too, so things like Friends and that, so you can listen and not lose much. Keep it up and keep us up to date!!

mariehart1 wrote:According to the instructions it only kills growing hairs and won't work on blonde but my blonde hairs are really fine.

I am not a fan of laser hair removal preferring electrolysis. A good technician can see the difference in the growth stage of the hair a target (mostly) the growing hair. Targeting anything else, as with a laser, is simply a waste of time and money.

Well the good thing about my one is that it runs on mains power, not a battery charge so I never have to worry about not getting done.

Oh, having one that runs off the mains sounds good! I did not know of them and I always spend a long time studying before I buy anything. The laser ones are only chargeable though....

And I know the phases Miki, but most are in the growing phase at any one time. It's a choice, electro or laser. And then there is IPL to curtail growth too. Once electro was the only way to go, but most beauticians agree that if you have dark to light brown hair laser is undoubtedly the best today.

Most blondes have hair so light that they can shave everywhere and nothing will be apparent for quite some time, many days, weeks. I have a friend at work, when discussing this very thing, she is a lovely girl of 22 with beautiful natural black hair. She showed me her legs, (I already knew of her problem, I had seen her forearms), there are little black dots everywhere! Unless she epilates with waxing or an epilator, she said she never looks good, but her skin suffers. I told her laser was the way, but she should look into it more, as to whether go for a good home laser around £500 or a salon, which is quite expensive.... it's hard to get rid of the little varmits, a curse upon womankind! I have many licked and it has taken a long time, but I hate the *@@*s!!!!

I'll jump for joy if I can reduce the shadow from my face. I'm lucky in the sense I have a fair complexion but it means the slightest bit of growth on my cheeks and chin stands right out! I haven't been too worried about using this thing on my legs, at least not yet. I've never been one to show them anyway, even in summer I rarely even wear shorts!

You can so get rid of the blueing, it may take a while and don't forget to leave an appropriate time inbetween. Blueing was only a problem for me in the moustache area and had that done wuite early, also I found the sideburn area stubborn.

With the legs, I find of all the strangest places my knees are a real problem, they used to be my most lightly covered region, but they are still there. They are lighter than the rest of my legs were, the leg hairs were light brown, but these are fairer and ultra thin and nothing will rid me of them. I've never attempted to zap bikini, coz it hurts lots! Chest was not a big problem, but I do have to get rid of some that lie from my navel to my bikini, that line is stubborn. Underarms, a pain and back is impossible, so needs to be shaved every so often. Oh, and rude to say, but bum middle joiny bit, that has to be shaved too!

The advances are great and what surprises me more than anything is that many women just let it go until they feel they have to! Apart from the real concientious ones, they know little of permanent epilation, yet I am constantly battling, (and winning!), in a never ending war with the little varmits!!!!!!!