Anyone ever heard about their surgery program? I'm in Milwaukee so not too far away. Too bad I can't take the train that Obama was going to pay for but Scott Walker denied.  BTW, are politics now verboten on the boards

Well, being in England, I know nothing of Milwaukee, except it's a brewery place that makes beer..... prefer wine myself but there ya go! Politics is quite allowed and encouraged upon the boards lass, as long as there's no nastiness in any disagreement..... not been many political posts recently though.

No idea, I only researched major west coast surgeons. And went with Meltzer Clinic in AZ.

Michi wrote:...BTW, are politics now verboten on the boards:

Is this a newer procedure, has anyone ever heard of it? Seems like it would be a lot less risk, no dilating.

No not a new procedure, just an uncommon one. It doesn't require dilation because you won't have a vagina. Just a vulva, clitoris, labia majora, and possibly a.labia minora. I would recommend it only if you don't think experience vaginal sex is worth it or something that you ever wanted. Which obviously is a very personal thing.

I personally don't want to bias you beyond saying dilation is annoying in the beginning but gets easier over time so I would say careful with making it into something bigger than it really is.

They called me back today, I'm going to go in for a consultation. I'm guessing the post-operative care in Madison could be better than a private plastic surgeon?

Scott Walker really screwed me over here. I should be taking the train but now I have to drive, have someone Drive, or bus. There was going to be a high-speed rail from Milwaukee to Madison as part of Obama's stimulus but Walker turned the 900 million dollars down and said he wanted to try to get more bus routes or something. It went the North Carolina and California. I never liked the Milwaukee to Madison Drive even though it's not that far, the train from Milwaukee to Chicago is great. There was a Spanish train maker that made cars in Milwaukee and they ended up suing Wisconsin over this, and left I believe.

Here's an article, seems like she does quite a few surgeries which gives me more confidence.

If I were to have reassignment surgery I would likely opt for something similar to the Zero Depth Vaginoplasty described in the article. I have also heard it described as labiaplasty. I have no desire for a man to stick his penis into me so I have no need for a vagina. Some transwomen do seek a vagina as that is a part of their sex life and that is not for me to criticize.

San Francisco is a magnet for trans people generally, but UCSF does not have a transgender surgery program specifically. There are a handful of surgeons who use UCSF facilities for the reassignment surgery but only on a privileges basis.

Stanford, on the other hand had a program in the 1980s and 90s where there was a program specifically targeting reassignment surgeries. It is no longer active and (my belief) was dropped likely for internal biases.

I am not aware of any surgeons who use Stanford's facilities for reassignment surgeries such as UCSF allows. 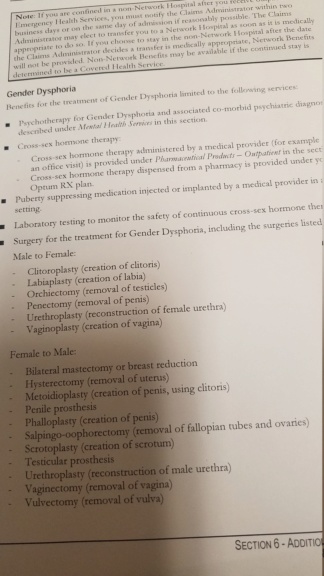 I am going for my consultation on Thursday. What would be a good list of questions to ask?

The initial consult went pretty well. I took the Badger Bus $20 each way. When I get my second letter they can schedule surgery and see what happens with insurance pre-approval. Keep your fingers crossed. Not till March but I want to try to get an earlier.

The date is set for 2/3/20. Hopefully it doesn't get delayed from the virus but assume it will set things back.

My thoughts on vaginoplasty with canal

Without canal means you have a door, no room behind the door. Your clit is where your fun comes from. But wait. Providing you have a partner that knows what they are doing, you CAN reach your male G spot through your canal. Not that they can't find it through your anus. But according to what I have been told, by actually doing it on me, it's easier to reach through your canal. With a finger.