I have watched the Columbian version of Narcos, regarding Pablo Escobar, on Netflix, it was quite a story and much closer to the truth then Narcos was, I believe it is simply called Pablo Escobar.

It is much, much more detailed and has around 70+ episodes of 45 minutes and does not glorify the DEA so much..... in fact they barely figure a lot. The Columbian DPI, Columbian army, police and secret service are there in the main.

It got me interested, so after watching El Chapo, a kinda of ok Mexican series soon after, I am now watching a semi-true series called La Ley Secreta, about four Columbian women involved in the Columbian DPI, an anti-drug enforcement agency....

It is one of the best drama series I have ever watched and that is with subtitles. Consider that I like only the very best English, Canadian and US drama when it is only top-notch, that I should find two Columbian series out of two to be so good was surprising, I have watched French, Italian and Spanish drama with little applause!

There was a Danish/Swedish production recently called The Bridge, I recommend that, but knowing Scandinavian psyche well, through my elder family, maybe it's not for you, but it is very subtle and good complicated drama.

But Columbia, in particular fascinates me, it's not a place I'd hurry to, but it seems anyone involved in any kinda power there undoubtedly leads a complicated life, to this day....

Sounds very good. Did you ever see Blow with Johnny Depp? Where he played George Jung, the American smuggler.

So, Boris wins with a huge majority. The people have rejected the far left and want Brexit done. The next 12 months will see lots of negotiating and the withdrawal will be at the end of January coming.

From my side of the Pond, it appears that Brexit and Corbin provided the election pulse.

Corbin pushed his Marxist agenda too far, even for the working class Northern English. Bernie Sanders would be considered a right-wing conservative standing next to Corbin.

I am a federation supporter and want a strong federal government. Brexit to me is as if California (where I live) would take its 7th most worldwide economy and left the States. It would devastate the remainder of the U.S. and in the end California would be subject to a lot of retaliation by the remaining states.

I'm not a fan of the far-left either so 'll be voting for Bloomberg.

Not a big Bloomberg fan, but at least Trump won't be able to best him as a successful businessman.

Trump tends to nickname anyone who can challenge him - Shorty Bloomberg is the moniker Trump has assigned him.

Well, it is quite amazing, the news channels, just listening as I type have stopped talking about Brexit here. It'll come up now and then as things progress, but at last other stuff is being discussed.

You know who I think you need..... Harris, Warren , Buttigieg, Bloomberg. In that order!!!! But I guess Bloomberg would do.

I will tell you now who you will get for the forlorn hope.... Biden. No ifs, no buts. That is who they will choose.

Just add here, yes Miki, that is why Labour lost, Corbyn and his shadow cabinet are way, way too far left.

As for the next opposition leader over here? God only knows, it is a bigger field than the democrats. There is a Labour MP for Wigan, that sounded very reasonable, though I can't remember her name right now. Apart from her and maybe one or two others, they will still be unelectable. Labour needs a moderate. I will revert to voting Green now anyway.

That sounds exciting celia. Hard to believe Michaela being tall really gives you an advantage in politics.

Probably height don't matter, but remember that famous photo of Barak Obama, (6' 1"), looking down at Putin..... that was something...… oh here it is! I think height is always good for men. 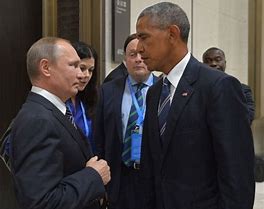 Probably height don't matter, but remember that famous photo of Barak Obama, (6' 1"),  looking down at Putin..... that was something...… oh here it is! I think height is always good for men.

It may be an American thing-

So I was giving out disininformation! Coz Kamala has left the race on December 3rd!!!!

So here is an update of the runners and riders with their odds and their age in brackets as it will be on inaugauriation day!!!! The odds are averages from all the big London bookies, they are very shrewd, they don't give money away very easily! Clinton's odds are interesting taking 12.5% of the book, that overall looks slightly upwards of about 130% or thereabouts. It's a 'if she does or not' proviso, I guess.

Just curious, what are the odds of tomorrow not happening

There are two middle of the road progressives that I initially supported but they decided early on to drop out. Sherrod Brown is a multi-term senator from Ohio and Michael Bennet, also a multi-term Senator from Colorado.

Both of these guys are from the Mid-west and would have a bright following nationwide and could easily stand up to Trump. Problem is with U.S. politics is the primary process. In order to get to the general election a potential candidate needs to run to the far-left (Democrat) or far-right (Republican) yet, at least for the Democrats, a far-left candidate CANNOT win the general election.

Corbyn was elected by the Labour Party as a far left wing candidate without non-centric ideal. It was clear from day one of his tenure that he was unelectable. So the odds of tomorrow never happening were obvious to all, except the politically blind(?) Labour party faithful from day one..... Corbyn would, could, never, ever be British Prime Minister.....

Are the Democrats really going to do the same? Coz I am not joking. The London bookies are NOT stupid! But the Democratic party has machininations within that neither you, or much less I, know of. I agree with you Miki, if they should choose Sanders, for example, it would be electoral suicide, Trump would win easily. Warren, probably so.

You must know much more of these guys than I, but please, US Democrats, pick someone Middle of the Road!!!!!! I am not the one that choses, it is you! Or at least DP members. I am only the messenger, don't shootypoo me! I am the one simply laying out how the odds are going, set by very clevery people, prepared to not lose assets upon their judgement! It is a very good guide as who mayb the most likely to win!!!!! I have said from the start it will be Biden and I still say that is who it will be.

Celia Eriksson wrote:I have said from the start it will be Biden and I still say that is who it will be.

I agree that it will be Biden. Unfortunately, the Trump assigned nickname - 'Sleepy Joe' might become more evident the further along we go in the election process. Biden is 77 and it is starting to show. A couple of mental slips might be a disaster for the Dems.

MichaelaSJ wrote:A couple of mental slips might be a disaster for the Dems.

As if Trump hasn't been one continuous mental slip.

MichaelaSJ wrote:My early picks of Brown (67) and Bennet (55) have a lot of time left for future election but if Trump wins in 2020 I think the US and likely the Western World generally will be headed into a deep right-wing universe that will make the 1930s Europe look like a Utopian dream.