Looking for some Christmas wine bottle gift bags I knew I had the back of my big store cupboard, I found a tray of about six of my watches. Three were still going, one is a windy up one and the others needed batteries which I do myself.... coz I got lots and it's cheapier than going to the jeweller! Though some have backs I can't open....

I grabbed some of my others and photoied them. I'm sure I have more somewhere, anyway, it still surprised me that I even have as many as 22! Some have memories! The top left is my oldest one, it is a USSR Sekonda given to me by Chris one Christmas when I was about 22, it is one of two men's ones here, though the big blue two are unisex sports watches that I wear at Badminton.

Among my favourites are the big faced cheapo Citron, fourth from the left at the bottom, the square faced Cynthia Rowley black one second from left. My most favouristical is the Oasis watch left of the blue rubbery ones, I do wear that most. The classiest is the gold one left of that, but I'm not gonna say much else, I don't want to get burglified! The Mickey Mouse has memories, it's a wood faced one and the Adidas is a first of it's kind too the red stripes on white, left of the top row cocktail watch... I do wear lots of different ones, but have recently gone with the fashion of big faced watches more these days. I'll have to show you my sneaker collection at some point! I truly don't know how many! And as for jeans...… oh my lots!!!! 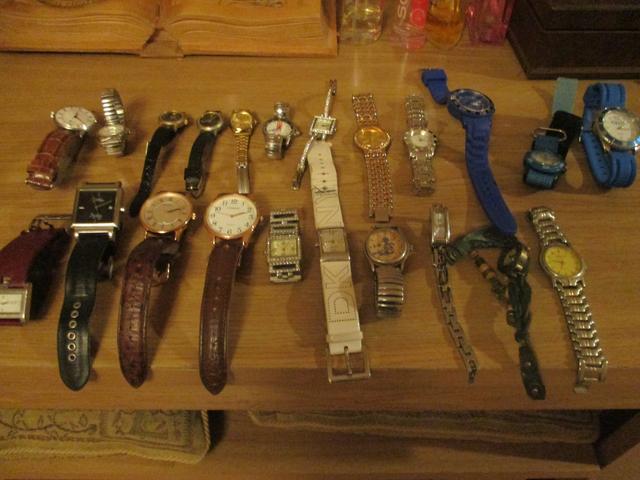 25 years ago, the time stopped mattering in my life.

There are two times of day to me, the light part and the dark part.
Aside from Sunday and Saturday that have different commercial schedules, I rarely care what day it is. No relevance in my life.

Right now it is Wednesday and 12:40 according to the computer. But it doesn't really mean anything to me. Yesterday looked the same, and tomorrow will be no different. Holiday weekends are pointless distinctions. They're all the same to me.

When I was in my teens, my Paternal Grandfather gave me a Hamilton gold watch. I over wound it and it broke. I took it to a jeweler for fixing but since I was in the Navy at the time, my ship went to Vietnam and I forgot about the watch. The Hamilton was an heirloom watch made in the early 1900s.

My Father gave me his 25 years work anniversary watch when I was in my twenties. I put it in the glove box of my Volkswagen and it was broken in one morning and stolen.