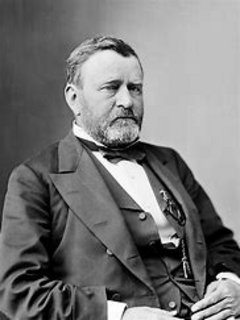 I was going to go with the 26th Amendment to the Constitution which reads:

Section 1. The right of citizens of the United States, who are eighteen years of age or older, to vote shall not be denied or abridged by the United States or by any State on account of age. Section 2. The Congress shall have the power to enforce this article by appropriate legislation.

But you beat me to it with Ulysses S. Grant, 18th President of the United States.

Yes I get the History channel and also National Geographic and Smithosian, which are very god sometimes. I do like a bio of historic folk as many led very interesting lives to be remembered so.

Sorry I jumped in, I will leave you and other Americans the alternate ones, odd numbers and I will only attempt even numbers, else it is unfair as I am several hours ahead! 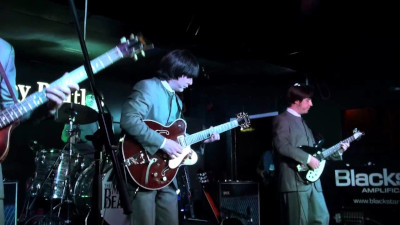 I think I have it unless there is some Beatles thing I have missed? That is apart from the fact that your picture is not the real Beatles, coz Paul is left handed!!!!! see here: 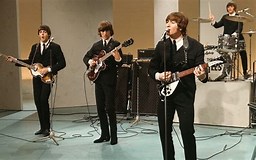 How is Sammy by the way? I am sure that is the name of your doggy you told me of some time ago. He must be getting very trained up by now Miki. Take care sweet friend,

Well, she was just seventeen
You know what I mean
And the way she looked was way beyond compare
So how could I dance with another (Ooh)
When I saw her standing there

Sammy is a hand full. See is EXTREMELY protect. We have a cut glass panel in our front door and everytime she someone walk in front of the house se goes crazy barking until the person has passed.

If someone rings the doorbell, all hell breaks loose and I literally have to drag her into the kitchen and close her off so I can answer the door.

Oh, she is a handful then! But very good to have a protective doggy about the house, as long as she knows that you are the boss, and I am sure that you are. Oh, the song, well..... that was extremely hard, yes! So I would have to have gone through every lyric of the hundreds of Beatles songs to have found that... Humph.... pooh!

And I thought I was being very superbically detectivey by finding the number ones, even with the fake photo!!!!!

I have a feeling my number 16 will be a little easier!!!! 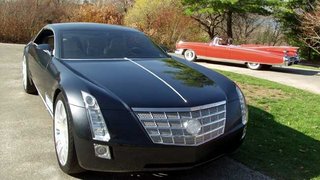 Nice choice. Cadillac's Sixteen was intended to go against the Bentley, Rolls-Royce, Maybach market. It had a 16 cylinder engine, and hence its name.

Cadillac has been the soul of General Motors with its innovative designs and attention to detail that is lacking in the rest of the General Motors lineup (excepting maybe the Corvette).

Yes it is quite a nice car, I tried to look up Cadillac 'boat', but only real boats come up..... what is the Cadillac Boat Miki?

Anyway I guess I'll cover two then as nobody did yesterdays!!!!

Hold the bus, whilst I look around!!!! 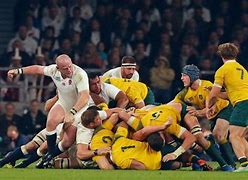 And here is my superbical 'you have to work it out' type picture clue for days left today!!!!!!!... (especiallicital for those that like to peer through one of those long thingys that looks into the sky!!!!!) 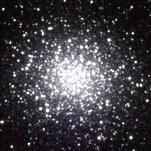 A 'boat' is a very large car, a la a Cadillac Fleetwood.

The top image I think is a 'Rugby scrum' but i am lost as to how it relates to 15.

The second image is Messier (M)15, a globular cluster in the constellation Pegasus.

Two more weeks of clenched fists, nervous twitter, pulled hair hoping, maybe beyond all hope, that we elect a new AND different POTUS.

Well done Miki, you are an astronomicacal genius!!!! Oh, the rugby union one is because in rugby there are fifteen players on each side..... a bit hard I suppose!

Just two weeks to go and it will be very exciting! We in the UK can see the results from the exit polls quite late for us, about midnight to 2 a.m., but I may well stay up and celebrate!!!! Though I do have a fair on the 5th, so I best not overdo it!!!!! (Yes I have started my new 'vocation' and fully retired from full time work now I am 60!!!). 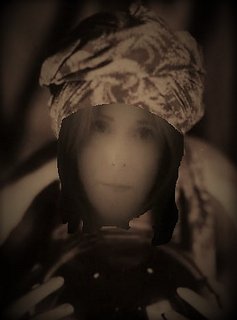 We have Rugby 7s over here that is popular but I am not particularly interested in watching.

Last election, I went to take a nap while they were counting the votes. I came downstairs around 1:00 AM only to see some very long faces on my Wife and Daughter - YEP, Trump had won! Shit!

This year we have some kickers in the process that might mean not getting election results for up to a week after November 3. With COVID, a lot of folk are using mail-in ballots. These ballots (in most states) cannot be opened until the day of the election and with the very large expected number of mail-in ballots, the count will likely be delayed.

I'm not a fan of 7s, I am no great Rugby afficiendio but I do like to watch.... especially the internationals, full 15, it is a much better and the real game. I can't see how the constitution could allow that, surely the result is final, but remember the chad thingy? Florida was it? I actually like George W., I think he was well measured, has a good sense of humour and was actually one of your better ones. I think it was his election that had the chads?

Anyway we are on to number 14! 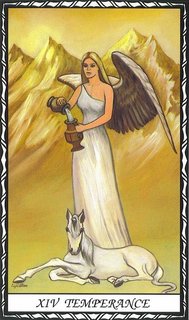 Temperance or The Angel Of Time is the 14th card in Tarot.

Card XIV is an Angel card. The Temperance card is reverse poor, so if turned upside down as the character card it is a negative card, if upright it is quite a good card.

For upright it tells me that in the past and the present, it can be drawn either, the subject is quite level headed and has clear, straight forward goals in life. Their character is balanced and they usually will be sceptical of anything they have not seen or held as being factual. Quite why they are sitting opposite me is quite unnerving, for they will be sceptical of Tarot.

If it is drawn as a future card, it will show that person will find contentment in life and end their days quite happy.

Reversed, or upside down is quite the opposite. For Past and Present are again linked together in time and cannot be seperated with this card, so drawn either past or present will have this influence. It shows somebody that has never been able to have a firm grip upon their own actions. They may well be addicts of some variety. They have led rather broken lives in love, fortune and have experienced highs and lows. They also believe anything that people tell them. Drawn as a future card it will show that person will live with confusion for the rest of their lives. It has negative affects on many of the better cards.

When asking a specific of this card the answer is complicated, for it will depend upon the question very much. I often have to pause and think of the effect of this card upon such, and the status of uprightness will influence that also, it can take a few minutes. For it has many answers and is not necessarily a straight yes or no. Because she is an Angel card, a messenger, it sometimes is more specific in that answer, with a message. Further, because she is the Angel Of Time, she will indicate that the subject cannot have an answer, but they must follow their heart or even carry on without a specific answer, for all will reveal in time.

You keep beating me to the punch - being 7 hours ahead of me.

IAC, here is my contribution:

...involuntary servitude, as it exists in different states of this confederacy, is recognized by the Constitution. 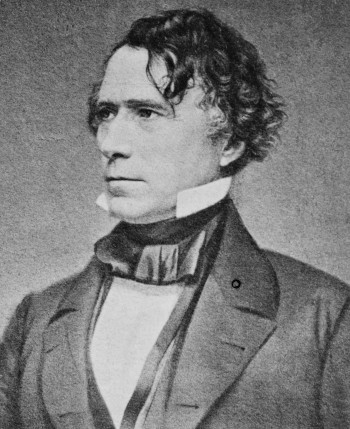 Just thought I'd stop in and try and be a voice of reason. I'm not new here. I was here before TGboards crashed a few years ago, under a different username at the time.

I want to reassure you all the a second term for Trump is not going to be the end of your world. I can't get over how he has been demonized. He is probably the single most LGBT friendly president the country has ever had. He didn't support us openly serving in the military, and guess what, neither do I. The military isn't the place for anybody to transition.

But this man has a history of being open and accepting of people of all races, colors, creeds and religions. Then, like magic, as soon as he came down the golden escalator he became Satan incarnate. Has to be one of the weirdest things I've ever seen.

But I'm going to vote for Trump, again, and I'm proud to say that. Joe Biden is every bit as corrupt as Hillary Clinton (and because I know how sensitive you all are here I will refrain from my usual term for her, "Hildabeast"). These people are sophists. They'll tell you anything you want to hear, blow smoke up your ass. But they don't give not one single $*** about you or me.

Joe Biden will wreck this country and become a vassal of the CCP. That's bad for absolutely everybody who's name isn't either Biden or Ping. And let's face it. Even if he wins, he'll be in for what? Six months? Maybe a year? Then we'll have Harris. I shudder to think of the damage that will happen with her there. It will be catastrophic.

So take heart! When Trump wins, your life will go on! It might even get better, if you let it.

You have a contrary view to many on this board and I don't want this thread to devolve into something I didn't want.

It is on again 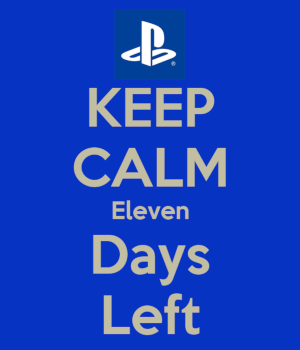 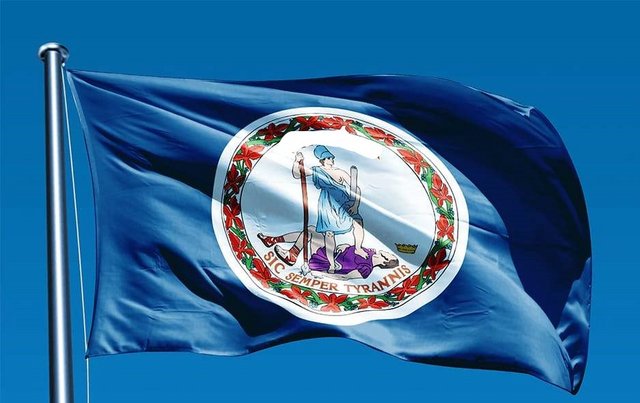 bad outcomes should or eventually will befall tyrants.

We can only hope! 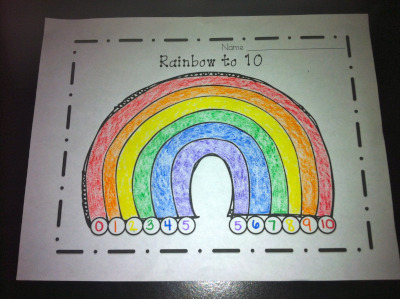 bad outcomes should or eventually will befall tyrants.

We can only hope!

We are brilliant as always! 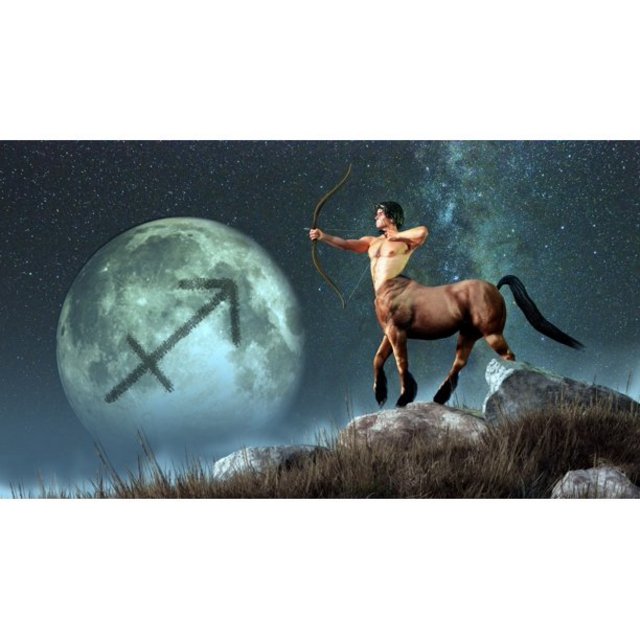 Sagittarius - the archer and the ninth sign of the Zodiac. 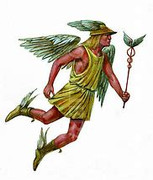 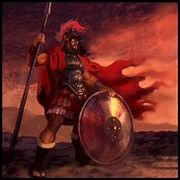 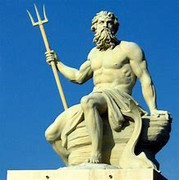 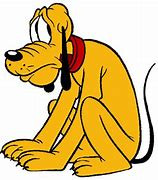 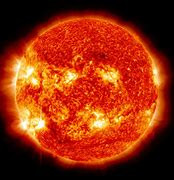 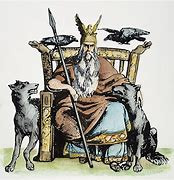 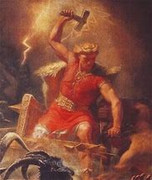 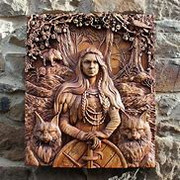 Well, maybe ya don't know, so i will explain to those of us, ahem, who were confusiyized!

..... there are 8planets in the Solary System.... and Pluto is sad, because he got kicked out!