Well, what can I say.... gulp. I thought I would share the latest addition to my household. And what an addition it has been. It arrived last weekend and I made sure I tracked the amazon parcel start to finish. and clung on to the parcel for dear life outside my little home when the amazon man came. I have long endeavoured with 5 inch varieties of an essential that I simply could not live without.... but this was a bold purchase in actualness of factiness!

Yes, you guessed it.... and I am not shy of sharing, I have no skeletons, nothing to hide and if any advice I can give to the brave amongst my kind that are straight, preferring men over women mtf or are bi mtf, then I shall share it. This forum is strictly for over 18's anyway and we are all adults.

When I opened it, I thought I should send it back, for it was simply quite huge. It is 8 inches long and though I know I have accommodated that kind of length and girth before, it has been some time. I do like the vibrating ones, but this is a King amongst the shower kind. It is so life like and the whole thing so real, being of the perfect texture. So, I decided to try. I took it and my lube... without being sensible and using one of my puny 5's to make way and the pleasure it gave was uncomprehensable..... double gulp.... there have been several showers too many in my little van the past week...

My, my, that has taken some to write, but I recommend this. Message me if you want the brand. Here is it's permanent place for now... the suction is super powerful, no slipping or unstickying!!! 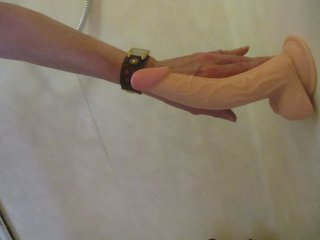 First off dear, you have no reason for shame

Second, if not for numerous transgirls who are still functional, maybe I'd consider this a good idea.

I'm demi though, and without D'arcy, I'd probably be mostly ace. The last thing D'arcy is though is ace

WAYYYYY back when my Wife had an IUD placed appropriately. After a couple of marital trysts, I stared to complain to my Wife that I could feel the wire of the IUD and I asked Her to ask Her OB-GYN to move it.

See saw the doctor and he expressed astonishment that I could reach that far.

I would like to point out that while I might be bragging, there is no way would I ever, EVER, consider myself to be in the same league as that monster.

"Where do you plan on putting that thing anyway."

I actually have 2 choices myself