I like the older steam locomotives. They were noisy, dirty but they could pull a city behind them. When I was six (1951) my mother took me on a train from San Francisco to Los Angeles. One of these behemoths towed the train:

I love trains as well. 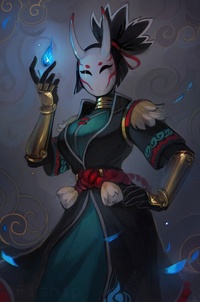 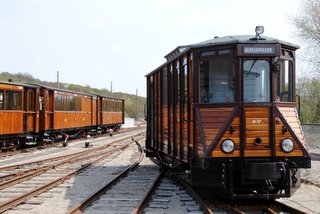 I get Cable Cars instead of trams: 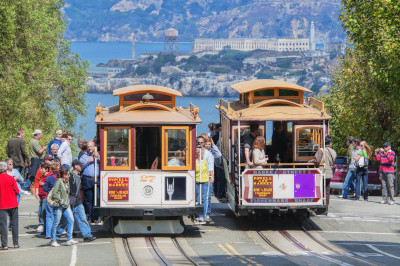 The island in the background is Alcatraz. When I was born, this was the toughest prison in the U.S. and I remember the prisoners waving at the party fishing boat I was on with my mother (age 6). I landed a #28 Striped Bass that trip - first fish I ever caught!

I have seen those on tv many times, do they have overhead lines then? Or is their a live rail? Here it is either train, tram or trolley bus, but there have been no trolley buses for quite some time! Cable Cars take one up a mountain over here!!!!Wow, Alca traz, where Robert Stroud wrote his physiology books on Birdies and Clint Eastwood made a daring escape. 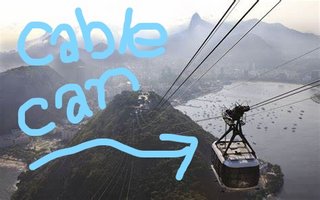 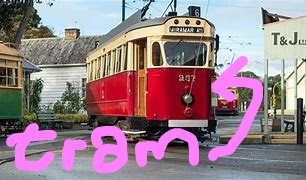 Celia Eriksson wrote:...do they have overhead lines then? Or is their a live rail?

Neither. There are two surviving cable car lines and on each line has a continuous cable run underground and the cable is driven by a separate drive motor. The cable itself is driven at a constant speed. These cables are driven in a central facility called the Cable Car Powerhouse. The Powell/Mason line has 28 cars available to be put on the cable.

In the image below is the cable drive for (L) the California St. line and on the (R) for the Powell/Mason St. line: 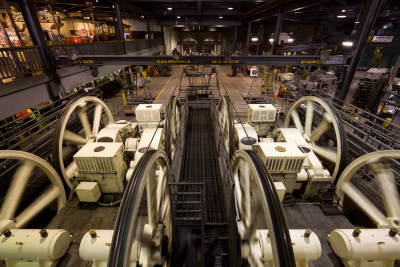 The cable cars themselves ride on rail tracks with a split housing 'Slot' (as in the Cable Car image above) that allows the car to be attached to the cable.

A good read of the history and workings of this relic of the past that should never be forgotten or destroyed is at: http://cablecarmuseum.org/mechanical.html

Thank you for the explanation!!! I think that is amazing! It is something I never knew.... a cable under the street, how it goes round in a loop. I will have to look up.

So it truly is a cable car.... please forgive my pics1!!!! I had thought that it was you Americans trying to be different with English, I like to think it's kind of WOI and 1812 hangover....

...Rather like your use of 'hood' and 'trunk' on a car for example! For a hood I would wear over my head and a trunk is to be found on the front of an Elephant!!!!