I mostly just wanna hear other people's thoughts if they have seen the show. I think it's a really good lighthearted show the plot is a little fast paced and kind of lacking details but it feels okay with me because it makes it good for a more light hearted show 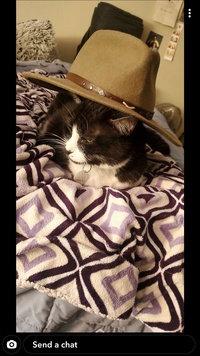 I recently took up Netflix again after moving. I was looking for shows to watch, so I shall take a look at some stage. I am more into period drama, and having never watched Downton Abbey, kind of saving it for a rainy day, I took it up and am getting very engrossed in the show. I believe it is six or seven seasons, so it may take some time!

My favourite Cousin came to stay the weekend, so I watched a few films with her. She seems to favour films depicting the World Wars..... we atched four in total Friday and Saturday, the one about Alan Turing, then 1917, The Pianist and another one that the name quite escapes me.

I have no notion of Q Force, but I never judge until I watch something..... and here Michaela may wade in.... for she recommended me one about Popes...... and by chance I mentioned of it to my Cousin and she felt and did exactly the same as me, stopped watching it after five minutes of sheer boredom!!!!! Sorry Miki!!!

I like Netflix, Narcos, Queen Of The South, Queen's Gambit and Lillehammer are my favourite from the streaming company, I have watched those twice!!!!

I just picked up an Amazon FireStick and it comes loaded. The picture quality is excellent and a lot of the sports are sent in 4K, which if your TV supports 4K, it is measurably clearer.

I suffer a form of PTSD referred to as 'Survivor's Guilt' (Vietnam) so I watch a lot of war films as a cathartic.

I do not recall Q Force but might give it a try.

Jude Law produced and acted in a series called "The New Pope". It was a very ironic look at current Catholicism and Popery and if you are a Catholic, pass...but it is a very nicely written and produced series.

As for Narcos, Queen Of The South, Queen's Gambit and Lillehammer: I have watched Narcos (it is okay); found Queen of the South to be simply too bloody for my taste; binged on Queen's Gambit; and have not seen Lillehammer.BTW, the producers of Queen's Gambit is being sued for slander. Seems there was a female chess champ who the series made an indistinct reference to that she had never played against a male chess master - she had. Not sure if she will get rich suing for this slight, but... https://uproxx.com/tv/netflix-sued-queens-gambit-defamation/[/list]