It is raining outside and it is going to rain for the rest of the day..... I am lucky that in any case, I designated this weekend for my Autumn Spring clean, if that makes sense!

I did the entire kitchen yesterday afternoon as I only did a half shift Friday. I finished everything, from the inside of the cupboards, the walls, the fridge, the cooker, the surfaces, well everything, I even polished the floor and  now tiptoe around my kitchen, else I would slippy slide! It's not a huge area only about 12 or eleven feet x five or six, in my little moby.

Well I digress. I'm having a coffee after my very slow ablutions this morning, well mid-day now... ..... just showering I was in the shower for about 45 minutes!!!!!

There I go again!!!! Off the topic again!!!! So, whilst in the shower I reflected upon what I should like to do before I step off this mortal coil..... before my days upon this earth that I dance upon are done and over..... before I pushed up Daisies with my little toe under God's Earth..... before I flew high into the heavenly aura on the wings of the destiny of death..... trudged down the long, dark road of despair towards everlasting bleak Winter..... then I cheered up!!!

So here is my list, not in any particular order. Please do put yours here too!!! I thought it would also be fun to put after each 'wanna do' a mark out of ten as to the likelihood of it occurring. So for example the chances of me kissing Dominic Cumberbatch are 0/10....

1. Learn to ride side saddle. I can ride, or at least I could and feel able to. Us Children were lucky enough to have two ponies and were taught to ride, something I have not done since adulthood. I'd love to ride side saddle and then join a drag hunt, (no live quarry, meat is 'dragged'), in black finery and top hat to boot..... every time I see it in period dramas I am so jealous. 1/10, I really would be too scared of falling off.

2. Get married in white at a beautiful church. An ivory 3/4, (lace), sleeved mermaid dress with portrait neck and a touch of green floral detailing, an all green posy and a floral lace blusher veil, to be lifted at that magical moment and a very tall Bridegroom, slim and athletic to do so.... ahem! As for the whole of that..... 0/10, the church would not allow it..... but a registry office, well who knows?

3. To play a musical instrument well, very well. I can conjure up a few ditties on my concertina.... I have tried the accordion and failed, the guitar and failed and though I did have a little push towards the piano, I succeeded in staving off the lessons that I could of had upon it. I guess I would like to play something like the banjo, the guitar or fiddle. I guess I should apply myself to my concertina a little more.... at least. Maybe I shall. 5/10

4. Go to Prince Edward Island. This has always been on the cards, there are few places in the world that I want to go. I shall hope to visit Norway again before I die, but PEI because of my love of Lucy Maud Montgomery's books and the island has lots to do around those and the wonderful tv series of them, that apart from it's natural beauty too. Quite likely. 7/10

5. Learn to stand up for myself a little more and learn to say no to people's requests more. I really don't need to go into much detail, it's self explanatory. I am talking about people inviting themselves to my time and attention. The long phone calls that I really sometimes do not have time for, the arrangements I rarely say no to. I give in too easily also, I never argue, I never say boo to a goose. I need to hone my skills in this direction, but, upsetting people's grand plans is not me, I don't like anyone being disappointed, if they have been kind enough to have found time for me, feeling that I would benefit, even though I don't want to do it. I think that's it. I did go into some detail, I guess. 1/10

I suppose that is about it for now. Do tell of your things....

It's a Canadian Thing, but lately PEI has been in the news in a positive vein

Make a train layout.
Get my models under control (mainly means pick a scale, dedicate my time to it). Likely means 72nd scale, more space-friendly.
Learn cross-stitching and enjoy it (it's very pick up and do for a while friendly).
Juuuuust keep on reading.

My bucket list isn't too long anymore. Most of my transgenderness is past tense now. If you want to know what the finish line looks like, I can draw ya a picture.

Lesley Niyori wrote:It's a Canadian Thing, but lately PEI has been in the news in a positive vein

I agree with the painting thing, I too intend to devote more time to that.... 10/10... but what on earth was the Canadian thing about PEI????? I am quite intrigued and need to know..... now it's mentioned?

Celia, a great list, and one of the very difficult things to do is to learn to say - "NO (. or !)". When I was a general contractor, I learned to say no really quick, but firing someone didn't come until later, and after the supervising employee and his crew managed to steal all of my tools and buy about $90,000 in building materials - which I had to pay for, of course.

I hope you make it to PEI after this coming winter. I am not as tough as Bunny, and there is no way I would stand a winter anywhere it snows or gets cold.

For some reason, my chronic severe depression is abating (better drugs) and I want to start doing something again. With that said, here is my list:

I did a complete remodel of my current house in 1996, doubling the size from 1,264 sqft to 2,520 sqft. I designed the remodel and I am happy with the design, but there are some errors needing correction.

Dianne and I just spent 4 hours and $14,000 for a new GE kitchen (oven/microwave, refrigerator, induction cooktop, island hood, and trash compactor). These won't arrive until January 2, 2022, when I will start building the new kitchen cabinets.

The first thing this month will be to rip out the poorly installed HVAC ductwork under the first floor; add blown-in open-cell insulation and replace the HVAC ductwork. We had two families of rats living in our ducts for years. (Fortunately, they weren't Norwegian rats, Celia).

The next thing (November) will be to demo the living/dining/entry wall of the existing floor and install .75" x 3.25" oak flooring. The demo will be two days and the install will be two days.

I am gutting the kitchen, which is actually original to the house in 1957. My Mother-in-Law, bless her heart, put new cabinets in 25 years ago on the cheap.

I have almost all of my woodworking tools leftover from when I built houses, so I do not need to replenish too much of the shop - looking forward to building the new cabinets which will likely take about 3 months - but, what the hell, there is only so much TV.

I can't go anywhere, I dare not use petrol..... I don't want to queue up for hours. So, I started to garden today, to do a little weeding..... but the rains came again, blue sky to Cats and Dogs. I have read it will rain for the rest of the day. I shall watch a little tv in a while. I just did a little ebay and bought a nice coat....

They are good skills Michaela. I can decorate, I already did my bedroom, shower and latrine at my little new moby..... I show some picks at the end. I do wish I could do more practical stuff, but I tend to marmalise all I try to touch where fixing or putting something together.

It might to be to do with the fact that I have been painting, artwise, for many years. I can match colours well and have a good knack for straight lines. I have read lots up about colours and their properties, from art, to fashion.

Certain colours look great together, others look awful.... it's an artform all by itself.

For example a redhead looks good in green or blue, but should avoid yellows, oranges and reds. Blondes and sky blue go very well, blue also. Brunettes yellows and reds. Of course most can pull off most colours, it is simply that those colours suit stand out best.

Confused? Well, there is always the ever faithful blacks and browns, beiges, and the whites and creams that are hit and miss. Multicolours need to be correct too. Blues and greens are awful, as are flaming oranges with reds or yellows...... I refuse to mention ghastly grey. being fit for purpose for any woman in any form. I should go on more...

My two tone pink bedroom was chosen carefully, the colours needed an exact contrast, I think I got it right. Here it is, it took but two days, the bathroom and washroom I chose deep yellow and took not so long. I use bathroom paint always as it can be wiped down easily should it become stained. 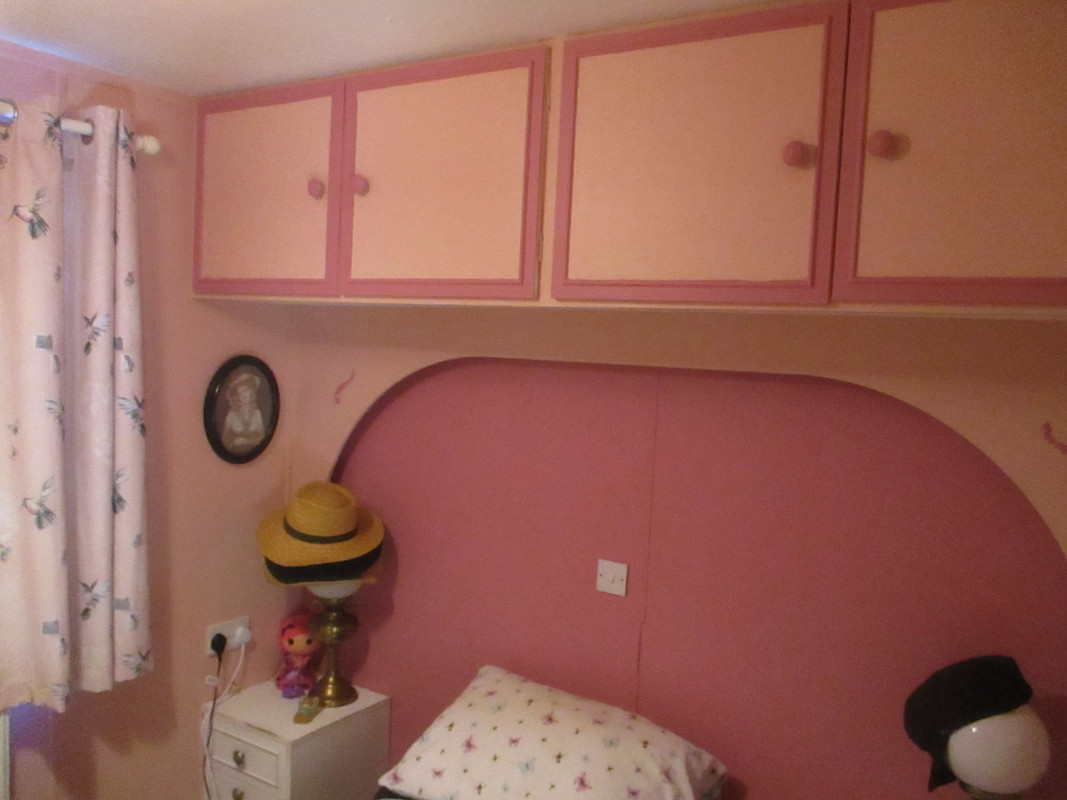 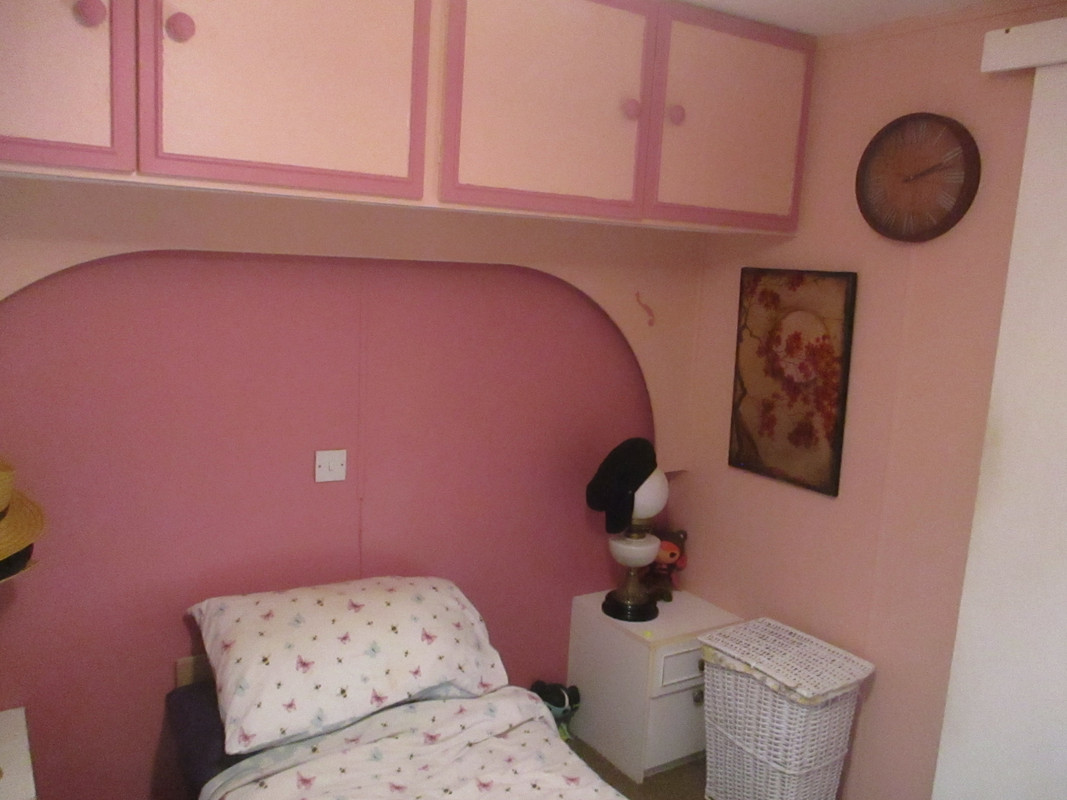 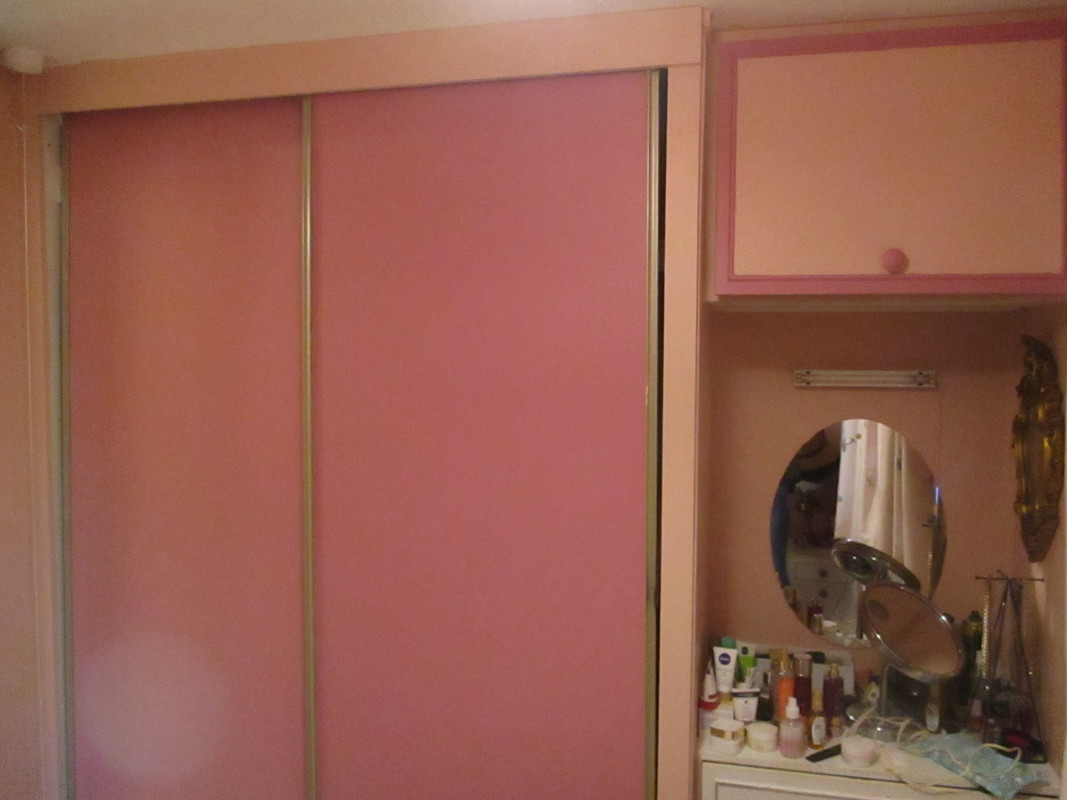 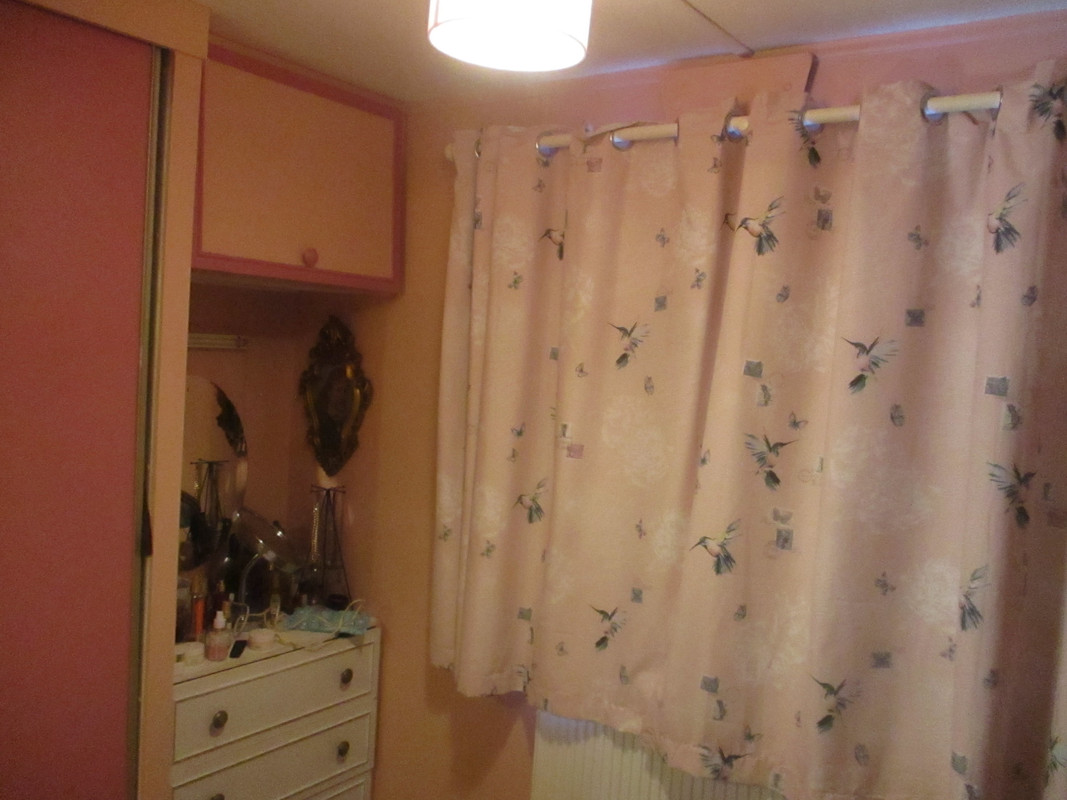 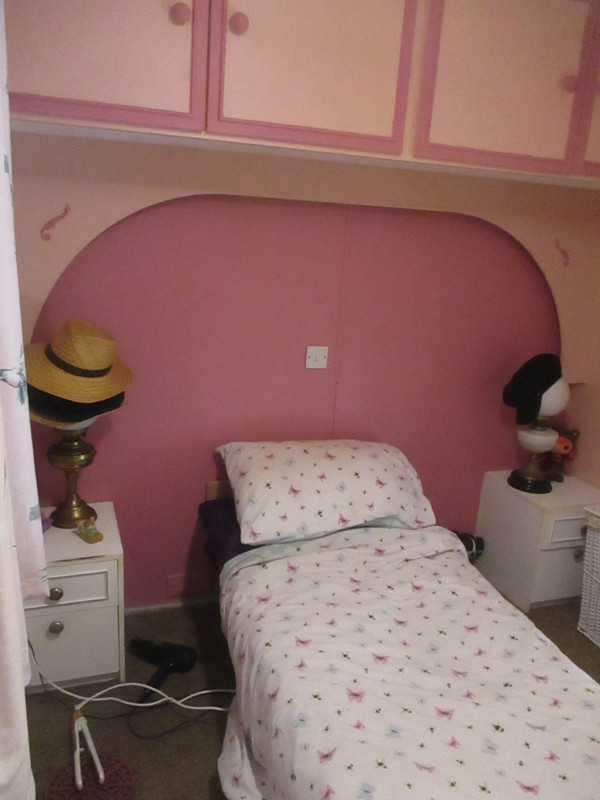 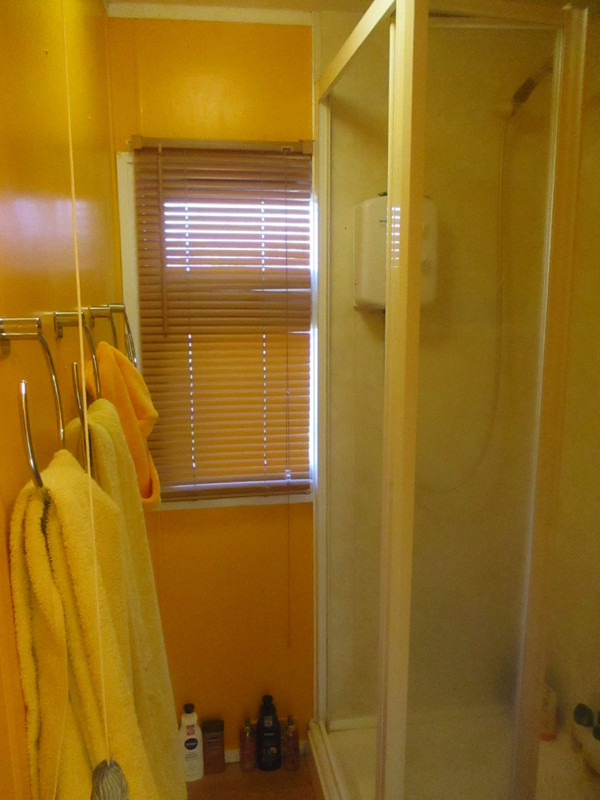 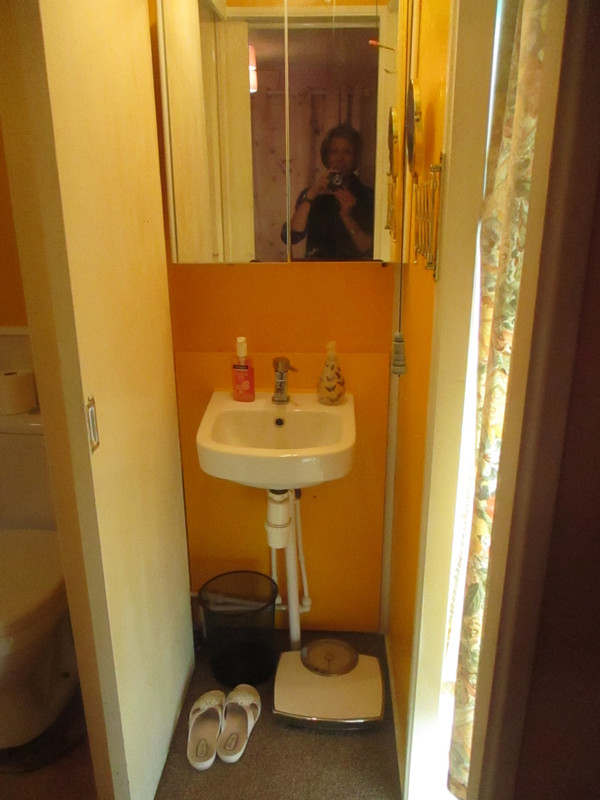